Go is played on a square board with black and white stones. Professional games are played on a 19x19 board; faster games can be played on smaller boards like 9x9 or 13x13.

A player can pass at any time; the game ends when both players pass. The occupied points as well as the points completely surrounded by a player count as their area; the player with the most area wins the game.

To compensate for differences in strength, the weaker player may start with a handicap of two or more stones. In even games, White gets extra points (komi) to compensate for Black’s advantage of playing first. The komi usually includes a half point to avoid draws.

Stones that are completely surrounded are captured and removed from the board. For example, White can play at A to capture the black stone.

Blocks of stones connected vertically or horizontally fight together and are captured as a unit. For example, White playing at A will capture three stones:

You're not allowed to repeat previous board positions; the rule of ko prohibits you from playing a move that would cause the position to be repeated.

In the above example, you can't capture back immediately. However, you can re-capture after moves are played elsewhere on the board. So you can play a threat elsewhere and then take back after the opponent answers your threat.

Moves that end up being completely surrounded are forbidden. Two examples:

Both A and B are suicide for Black: The black stones would end up completely surrounded. However, Black can play at C, as that would capture two white stones:

A liberty is an empty point next to a block of stones. For example, this white block has three liberties, at A, B, and C:

A block is captured when it has no liberties. A block with a single liberty is said to be in atari.

Having just one liberty more than the opponent can be decisive. For example, two blocks in this diagram are locked in a race to capture: White can play A and B to capture the three black stones, while Black needs to play C, D, and E to capture the three white stones. White will win this fight.

An eye is a single empty point surrounded by one player. Unless a move there captures some stones, the opponent can't play in an eye due to the suicide rule.

A single eye can be completely surrounded and captured: 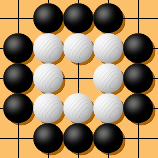 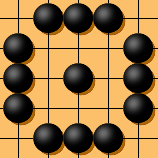 When a group has two eyes, it is safe from capture, even if completely surrounded, as the opponent can't play in either eye. Such a group is alive. For example: 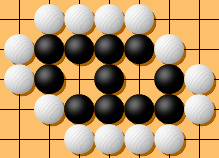 Beware of false eyes where the stones surrounding your eye can be captured: it is important to keep the stones around your eye connected by controlling the diagonals. For example, the following groups have a false eye due to the stones marked with triangles: 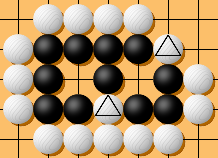 With the AGA rules used by SmartGo, the score remains the same whether White captures these stones or not.

Blocks can be alive in seki when they coexist in such a way that neither player wants to play. For example:

A move by either player would let the opponent capture, so both blocks stay on the board and are counted as alive at the end of the game.

There are two ways to count the score at the end of the game:

The two methods of scoring yield the same result if both players play the same number of stones. SmartGo uses the official rules of the AGA (American Go Association) to adjust for pass moves and handicap to ensure that the two scoring methods lead to the same result.

SmartGo Player includes a tutorial that teaches you the fundamentals of Go step-by-step. Each rule and tactic is followed by problems that let you practice and fully grasp the concept.

Go Books has books for every level, and will take you from beginner to expert.